The high-tech, yet simple design of the KING OmniPro™ is built to perform. The omnidirectional antenna design allows you to pick up uhf and vhf signals in all directions. The amplified antenna maximizes signal strength and signal range to provide the best TV reception available in your area. The KING OmniPro receives free VHF, UHF and FM signals. Manufactured with durable automotive-grade plastic, the outdoor antenna is weatherproof, UV-protected and resistant to rust. It’s designed to withstand your outdoor adventures in all climates.

With access to free over-the-air programming you’ll never have to miss your favorite shows, local news or live sporting events again. No more cable bills or satellite contracts. You’ll be watching free HDTV wherever the road leads you.

The KING OmniPro™ comes with all the gear you need to connect and mount to your RV, and once installed it's ready to use in minutes. The omnidirectional outdoor tv antenna searches for signals in all directions and does not require pointing. The signal is amplified for maximum strength, delivering a clearer picture to your TV.

When you're looking for a way to enjoy over-the-air programming, look no further than KING. For two decades, KING has been a leader, innovator and pioneer in the design and manufacturing of satellite TV and over-the-air antenna systems and accessories. The KING OmniPro™ is one more way we're bringing you the best omnidirectional antenna service you need with the advanced technology you deserve.

What is an omnidirectional over-the-air antenna?

A long range omnidirectional antenna is a 360 degree reception TV antenna, meaning it receives signal reception from all directions, and hence there is no need to rotate it or position it properly. It is ready for use after installation. This omni directional style of TV antenna is especially useful for those in the mobile market, or who are planning on relocating their antenna frequently, because each time you relocate, there won’t be any need to point the tv antenna or track down the tv signals and channels, since this antenna can receive signals in all directions, 360 degrees around.

Directional antennas are designed to receive signals from one direction. They will need to be angled in this specific direction to receive signals that will then be streamed to your television. These are often limited to carrying only one signal, the one it is currently aimed at. Because directional antennas focus all of their energy into one direction, they are more powerful and can pick up high signal quality uhf vhf tv signals from much further away.

Omnidirectional or multi-directional antennas have a 360 degree signal range and don’t need to be pointed at any specific angle. Instead, they pick up signals from multiple directions and transmit them to your television. As a result, they are easier to install and often receive multiple signals, providing access to more channels for people in certain areas. Omnidirectional outdoor tv antennas can pick up signals bouncing off other objects, making them a good choice for people who live in built-up or poor signal areas, or a signal blind zone where signal quality is poor.

Directional uhf and vhf tv antennas are best for people who live in rural areas. If you have a nearby city that has a lot of broadcast towers, you can have your tv antenna pointing toward the city, and you'll receive wireless signals from all the towers in that direction. The downside is that a directional antenna requires you to find where the signals are coming from and directly point your antenna toward them during installation. KING has a signal finding solution for that though, so if you are interested in purchasing a powerful directional antenna that’s easy to use and point, check out our Jack antenna here.

Omnidirectional tv antennas are much better suited for those who live in urban areas where tv stations are broadcast from different areas. You're surrounded by broadcast towers, and being able to receive signals from all of them can be excellent. The range should have you covered well, even if you live in a large city, and these omni directional tv antennas often have all the features you may need. The fact that you’re receiving signals from more than a single tower can translate into better image quality.

Can I watch both vhf and uhf channels with the KING OmniPro?

Is the OmniPro designed for RV and outdoor use?

The KING OmniPro is specifically designed for RVers - the sleek 360 omni directional design easily mounts to the roof of your RV and lets you avoid the hassle of pointing or cranking everytime you relocate your RV. Its weather resistant design allows for optimal use as an outdoor HDTV antenna.

Is the OmniPro a long-range antenna?

The OmniPro omnidirectional tv antenna is a powerful, long-range over-the-air HD TV antenna. Reception and how many channels you will be able to pick up largely depends on your location and geography.

The gain of an antenna indicates how well the antenna focuses energy from a particular direction, in comparison with a standard antenna. All of KING’s over-the-air tv antennas are considered high gain, because they are amplified and designed to pick up signals from a long range distance. Our long range antennas could mean the difference between picking up just a few nearby channels within a limited line of sight, and picking up many farther away channels from miles away, at a higher viewing quality. With both indoor and outdoor options, KING offers a variety of different solutions for both RV and home use, allowing you to take your favorite channels with you wherever you roam.

The KING OmniPro HD antenna delivers high definition, quality images to your screen. The antenna is amplified for maximum signal strength and reception range, delivering a clearer picture to your TV. Whether you are using your KING antenna on your RV or in your home, enjoy crystal clear reception and high quality HD TV pictures for all your TV viewing.

Can the OmniPro antenna be used in the home or for indoor use?

Yes, our omnidirectional tv antennas are great indoor tv antennas, however we would recommend our OmniGo design as opposed to our OmniPro, because it comes in a portable setup that does not require it to be mounted to anything. Because there is not pointing required, simply set up one of our KING omnidirectional tv antennas as an indoor antenna and enjoy improved signal range for your home tv. KING now also has a home mounting kit for indoor antenna use, to allow for seamless home use and easy installation, so stay tuned for our latest innovations! click here to learn more (link to https://kingconnect.com/connectivity-solutions/ota-home)

How many channels will I get with the KING OmniPro antenna?

The amount of channels you will be able to pick up with this omnidirectional outdoor tv antenna will largely depend on your location and what kind of mile range and landscape lies between you and the nearest TV broadcast towers. Because the omnidirectional outdoor tv antenna receives signals from all directions, it doesn’t point quite as far in any particular direction, therefore doesn’t reach signals as far away as some of our other long range directional tv antennas (such as the KING Jack Digital High Definition TV Directional OTA antenna). It does, however, allow you to bypass the hassle of having to repoint or crank the antenna everytime you relocate your RV to a new campsite.

Looking for an indoor TV antenna for home? Check out our KING OmniHome omnidirectional tv antenna (link to https://kingconnect.com/king-omnihome). For the best omnidirectional tv antennas for home, check out our full home OTA antenna lineup, which includes both indoor antennas and outdoor antennas. (link to https://kingconnect.com/connectivity-solutions/ota-home) 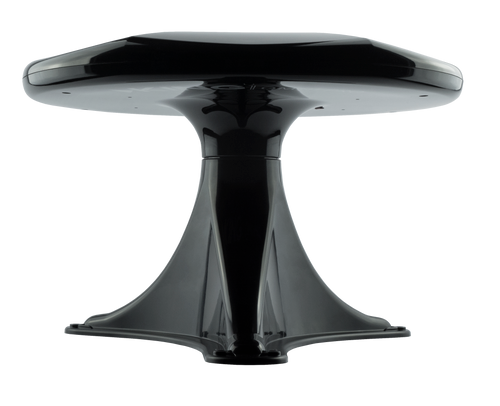